Genomics of hybrid breakdown and speciation in the copepod Tigriopus californicus 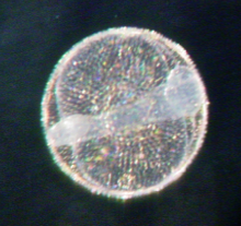 Fish egg that is unidentifiable without the use of molecular techniques.
Marine Protected Areas (MPAs) have been established along the coast of California. This study provides a baseline for monitoring fish spawning in the MPAs offshore of Scripps Institution of Oceanography. Studies of fish eggs complement diver surveys and trawls, which until now have been the primary source of information about the fish species in these MPAs. Egg surveys provide definitive evidence of local spawning activity, clarifying the role of the MPAs as breeding grounds for multiple species.

Using vertical plankton net tows, we collected eggs from the plankton off Scripps Pier.  Because most eggs are morphologically indistinguishable, molecular identification is necessary. DNA is amplified and species-specific primers are used to identify the most common species. The PCR products are sequenced and compared to published databases of DNA barcodes.

To date, over 7600 eggs from 39 species have been identified, including several not previously known to breed in this area (e.g. Cynoscion parvipinnis), which may represent northward range expansions in breeding activity. In the future, this survey can be used as a baseline to compare shifting populations and spawning patterns of species that may be affected by both the MPAs’ protection and broader oceanographic changes associated with global warming.
﻿Local adaptation in intertidal invertebrates﻿ 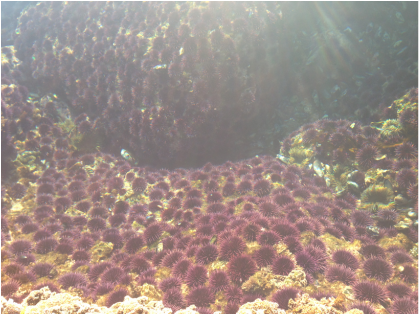 Sea urchins at Treasure Island tide pools, Laguna Beach, CA.
Many marine invertebrates have complex life histories including planktonic larval stages that may disperse among apparently isolated adult populations. We are interested in the impact of ocean currents, larval (and adult) behavior, breeding season, random chance events and selection on the genetic structure of different species.
Some highlights: